We are back after a time-out to get ready for and enjoy the 75th Sturgis Motorcycle Rally. Don’t know the exact number of attendees; some say close to a million people. In a community of 6700 people? And if you think it was crazy see the photo below: 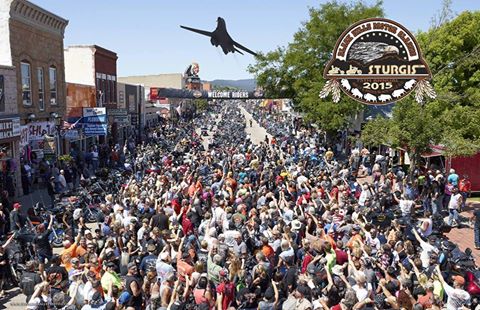 and the picture was NOT photo-shopped. That is an Air Force B1 flying down the main street of Sturgis.

I also came across this posted by an attendee:

There have been numerous glowing reviews for the Brian Wilson biopic “Music From Love & Mercy”; the soundtrack came out the 14th. Rhino releases newly remastered versions of all 4 Faces albums “You Can Make Me Dance, Sing or Anything (1970-1975)” August 28th. I am a huge DJ Spooky fan and on August 28th his score “Rebirth Of A Nation” for the infamous D.W. Griffith silent 1915 film performed by The Kronos Quartet drops. That same day Beach House releases their 5th album “Depression Cherry” and The Foals make their new album “What Went Down” available. Grace Potter’s debut solo album “Midnight” was released on the 14th. Yo La Tengo hits the road in September after the August 28th release of “Stuff Like That There”. The second album from the Reatards “Grown Up Fucked Up” is out the 21st and finally the new Destroyer album “Poison” is due the 28th.